Today’s post has been written by talented author and friend, Deborah Sprinkle. Her debut contemporary romantic suspense is a page turner! Welcome to Historical Nibbles, Deborah!

Together, the Mississippi and the Ohio Rivers create the arteries that feed the heart of our great nation. Both have played a major role in America’s history since its beginning, carrying the first explorers and the first pioneers, loaded with hopes and dreams. Today, barges ply their waters, loaded with coal and other major commercial goods. They’ve served as boundaries and as obstacles, as death traps and as lifelines.

They’ve played a part in every major conflict in our country. During the Civil War, control of the these mighty rivers became paramount. To do this, navies were needed, and in this regard, the industrial North had the advantage. Commander John Rodgers of the Union Navy ordered his ships to Cairo, Illinois, the confluence of the Ohio and the Mississippi. Constant patrolling of both waterways from this strategic location established Northern control to the point that Kentucky and Missouri remained neutral throughout the war.

More ships were built and the Mississippi ran red with the blood of our nation’s men as the North gained control of the river further south, culminating in the fall of Vicksburg in 1863.1 On April 9, 1865, Confederate General Robert E. Lee surrendered to Union General Ulysses S. Grant marking the beginning of the end to the conflict that pitted brother against brother, and took more American lives than any other war.

That’s when one of the most tragic river disasters in the history of our country happened. Two weeks later on April 27, the Sultana, a wooden steamboat, left St. Louis for New Orleans, her objective to pick up released Union soldiers and bring them home. Built to carry 376 passengers, she ended up with 2,137. She fought her way upriver, despite riding low in the water and nursing a patched boiler.  North of Memphis her luck ran out. Three of her four boilers exploded under the pressure of pushing against the current with so much extra weight. Loss of life was estimated at somewhere between 1,200 and 1,500 souls.

On the 150th anniversary of its sinking, a museum opened in Marion, Arkansas, memorializing the Sultana. Artifacts and pieces of the hull displayed were found in a field. The river’s course had changed by two miles since it went down.2

America started as colonies huddled on the east coast with a vast expanse of land to the west. With the help of the great rivers, we became territories and then states. We’ve fought for independence. We’ve fought for our borders. We’ve fought amongst ourselves. Each time, our rivers have been one of our most valuable resources. Ah, the tales they could tell. 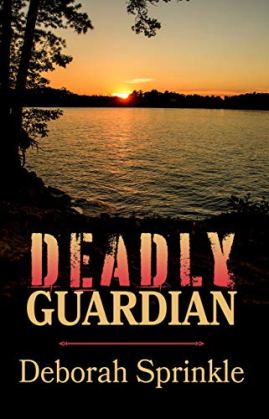 In my debut novel, Deadly Guardian, my heroine knows a lot about rivers. She grew up in St. Louis, Missouri, and currently lives near Cincinnati, Ohio. Both are river towns. One is on the Mississippi and the other graces the shores of the Ohio. While she doesn’t live on the river, she does have a home on a lake nearby. And that body of water gets her into…well, I don’t want to give it away. You’ll just have to read it for yourself.

Deborah Sprinkle is a retired chemistry teacher among other things. So it should come as no surprise that the protagonist in her debut novel, Deadly Guardian, is one as well. Mrs. Sprinkle is also co-author of a non-fiction book entitled Exploring the Faith of America’s Presidents.  She has won awards for her short stories, articles, and her latest work in progress. Mrs. Sprinkle lives in Memphis with her husband where she continues to be an ordinary woman serving an extraordinary God.

When the men she dated begin dying, Madison Long must convince the police of her innocence and help them determine who has taken on the role of her guardian before he kills the only man she ever truly loved, Detective Nate Zuberi.

Madison Long, a high school chemistry teacher, looks forward to a relaxing summer break. Instead, she suffers through a nightmare of threats, terror, and death. When she finds a man murdered she once dated, Detective Nate Zuberi is assigned to the case, and in the midst of chaos, attraction blossoms into love. Together, she and Nate search for her deadly guardian before he decides the only way to truly save her from what he considers a hurtful relationship is to kill her—and her policeman boyfriend as well.