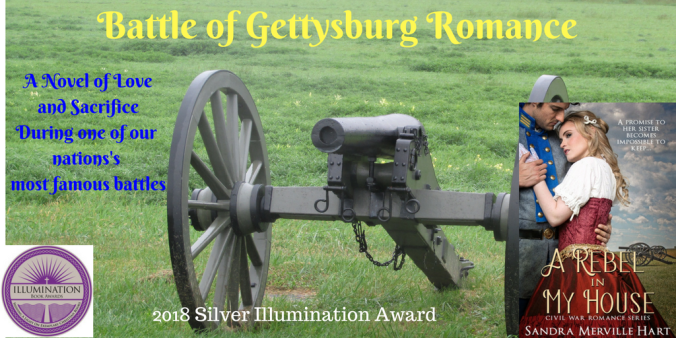 Something drew me yet again to Gettysburg. I had visited this battlefield before, but this time I knew there was a story waiting for me. I only had an inkling of an idea when I left my home that fall day—a Confederate soldier needs help from a Gettysburg seamstress. Not much to go on, is it? Sometimes novel ideas grow slowly and sometimes you know the whole story within an hour. A Rebel In My House swelled in my imagination as I explored Gettysburg.

My husband and I walked the battlefields. Ideas stirred when I found Tennessee troops with the brigade who began the fighting on the first day. Nothing solidified so I kept digging. I visited the museums. I discovered fascinating history at the Lutheran Theological Seminary at the Gettysburg Seminary Ridge Museum. Surely my story touched this place. Yet no ideas came. I trudged on.

Ideas strengthened. My husband and I walked the town’s streets around the “Diamond” or the town square where the women and children suffered through a nightmare. Then we spent another afternoon and evening at the battlefield.

Three Tennessee regiments fought the beginning battle on July 1st. They didn’t fight again until they joined in Pickett’s Charge.

The sun sank low on the horizon as I stood alone on Cemetery Ridge. The expansive field crossed by Pickett’s Charge on July 3, 1863, captured my imagination. Though the land is peaceful once more, it still tells a story. My imagination soared while the sun disappeared.

I had to tell what the townspeople endured. What if a Gettysburg woman fell in love with a Confederate soldier? What if they both made promises to loved ones? Some promises are impossible to keep …

I reluctantly left the ridge because I had a story to write. 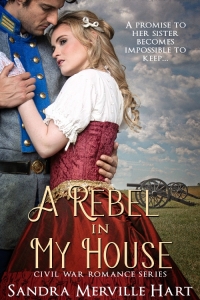 When the cannons roar beside Sarah Hubbard’s home outside of Gettysburg, she despairs of escaping the war that’s come to Pennsylvania. A wounded Confederate soldier on her doorstep leaves her with a heart-wrenching decision.

Separated from his unit and with a bullet in his back, Jesse Mitchell needs help. He seeks refuge at a house beside Willoughby Run. His future lies in the hands of a woman whose sympathies lay with the North.

Jesse has promised his sister-in-law he’d bring his brother home from the war. Sarah has promised her sister that she’d stay clear of the enemy. Can the two keep their promises amid a war bent on tearing their country apart?

2 thoughts on “What Story Awaited Me in Gettysburg?”